District Climate Resilience Plan (DCRP) is the first of its kind attempt to integrate climate resilience requirements and approaches into the district-level planning framework in the vulnerable and under-developed regions of India. The DCRP is aimed to be positioned as a complementary handbook of implementation for the district-level officials and public leaders such that they are able to appreciate and address the risks as well as support the recovery from impacts. As a follow-up to the State Action Plan on Climate Change (SAPCC), the DCRP is inclusive of sectors and governance areas that are key to resilience such as Disaster Management, Agriculture and Irrigation, Health, et al.

The project required engagement of the state government of Uttar Pradesh and district administrations of Jhansi and Chitrakoot as well as their communities. The Department of Environment in Lucknow endorsed the initiative while District level officials in various departments participated in the information sharing sessions. The under-developed state of U.P. is one of the largest in the country and its long-standing core development issues have been in the midst of political rivalry. The region of Bundelkhand which is in the scope of DCRP research has had a very interesting and unfortunate history implying the quantity of literature to be analysed and then validated with on-ground evidence and inputs from stakeholders in the 2 districts is also significant in scope and quantity. The time being taken for every stage is longer than anticipated so that methodology, secondary data and primary research are adequate and suitable for required outcomes. 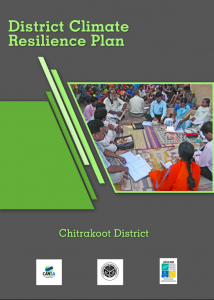 District level planning is currently carried out through coordination between District Planning Committee (DPC), Zila Panchayat accumulating Gram Panchayat Development Plans (GPDP) and Municipalities in urban areas. The DPC is mandated to develop a holistic plan for Panchayats and Municipalities including spatial planning, water and other physical/natural resources, integrated infrastructure, and environmental conservation.

Planning for climate change impacts needs to be made an integral part of regular development process with major focus on water availability, natural resources protection and restoration, 4

sustainable farm practices, livelihoods security, education and skills training, healthcare, social welfare, financial inclusion, and maintenance of critical infrastructure. There are multiple co-benefits of climate adaptation strategies for various development priorities as well as in many areas there are benefits of cost reduction and protection of life and property. 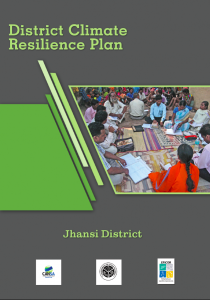 As global emissions from burning carbon-intensive fuels, deforestation, industrial agriculture et al continue to exhaust the greenhouse gas (GHG) emissions budget for 1.5ºC (the global temperature increase goal aspired to be achieved under Paris Agreement), there is an exponential increase in the vulnerability of India. Reports2 indicate that India is one of the most vulnerable countries in the world to climate impacts, with vast swathes becoming too hot for habitation by the year 2100, impacting agriculture, health and survival.